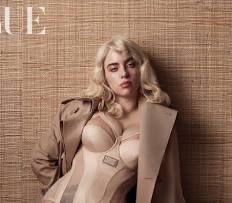 Pop star Billie Eilish predicted some would be upset by her Vogue photoshoot, but those who accuse her of selling out are missing the point, writes Polly Hudson

Pop star Billie Eilish has been in the public eye since she was 13. She’s the youngest artist to win the four main Grammy categories in the same year, to write a James Bond theme, to feature on the Forbes Celebrity 100 list.

But the thing she’s probably most famous for?

Unlike every other female music performer on the planet, she always wore baggy clothes.

The word “underwear” conjures up images of flimsy bras and barely there g-strings, but this is far from that, much more demure and covered up. It is, however, a definite departure from hoodies and loose fitting trousers.

Billie had made it known the shoot was her idea, her vision – she hadn’t been forced or even persuaded into these outfits by record company or magazine executives in suits. This was all her. She was in control.

“I love these pictures and I loved doing this shoot,” she wrote on the social media site, “Do whatever you want, whenever you want”.

Most of the comments were positive, applauding Billie for continuing to take on her career, her life, on her terms. Now the bad news. A – thankfully much smaller – number of people felt let down by Billie.

Yes, because of something she wore, on one occasion, in a women’s fashion magazine.

They made snarky comments about selling out, ignoring the simple truth that someone who just earned $53million doesn’t really need to do that.

They were thrown, unsettled by her apparent change of direction, decided their role model was a traitor. What utter nonsense.

With these photos, Billie Eilish is setting an incredible example to young women, just as she was when she wore voluminous clothes concealing her shape