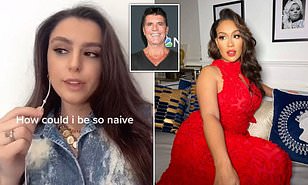 Cher Lloyd becomes latest X Factor contestant to hit out at show: Singer accuses bosses of ‘selling me the dream just to exploit me’ in TikTok video as Rebecca Ferguson calls for stronger watchdog to protect artists

Cher Lloyd has become the latest former X Factor star to slam the show, accusing bosses of taking advantage of her naivety and exploiting her.
Lloyd, who finished fourth in the 2010 edition of X Factor, claimed she was ‘sold a dream’ when appearing on the show at 17, before being exploited.

The now-27-year-old made the claims in a TikTok video, shortly after fellow former contestant Rebecca Ferguson demanded a parliamentary inquiry into the music industry and called for greater regulation to protect artists from ‘bullying’ agents and managers.

Earlier, X Factor alumni Jedward also blasted the show and claimed Simon Cowell sees himself as the ‘mafia leader’ of the music industry. They also said they regretted not telling the judges to ‘f**k off’ while on the ITV show.

Now, Ms Lloyd has joined the growing list of disgruntled of contestants, singing in a virtual duet: ‘How could I be so naive? They sold me the dream just to exploit me.

‘Said darling darling you’ll go far if you shake that a** and date a star. And if the record’s taking off we’ll take the money.’

She has previously criticised X Factor, revealing in an interview last year that she had been ‘thrown to the wolves’ and experienced racism, abuse and death threats.

Ms Ferguson, 34, who also appeared on The X Factor in 2010, posted a lengthy statement on social media where she revealed she is due to meet Culture Secretary Oliver Dowden to discuss how musicians are treated by bosses.

She hit out at ‘powerful’ agents, managers and other executives and called for an independent tribunal to hold them to account. The singer claims that this will protect artists and help change an ‘archaic system’.

In a series of tweets, Ms Ferguson also claimed that she knew two women who had been raped and others who had been driven close to suicide by the industry.

She also accused unnamed executives of ‘covering up sexual assault for your seedy friends’ and ‘grooming 17-year-old boys who are confused about their sexuality’.

The Liverpool-born star added: ‘At one point in my career I collapsed three times in a day, I was unconscious. My head hit the floor. No ambulance was called. This is one of many stories. This is the reality of artist mistreatment, this is why I fight.’

MMs Ferguson previously hit out at the industry in 2018 when she claimed to have been bullied, threatened and racially abused by executives.

She added that she had been too worried to speak out before in fear of the welfare of her children – Lillie, 18, and Karl, 16 – but ‘will not be silenced’ any longer. Keeping the names of her alleged abusers anonymous, she said she was subjected to the ‘absolute worst, systematic bullying’ behind-the-scenes.

Ms Ferguson found fame in 2010 as the runner-up of the seventh series of X Factor, losing out to Matt Cardle.  She then signed a joint record deal with Syco Music and Epic Records in the UK and later signed with Columbia Records in the US.

Jedward slammed music mogul Simon, 61, as ‘nothing but a bad facelift’ as they shared a video of them performing R.E.M.  Everybody Hurts, adding: ‘Everybody hurts [heart emoji].

‘It shouldn’t be normal that all artists have to face the emotional and legal battles when all they wanted to do is sing!’

The brothers continued in a series of lengthy tweets: ‘The Biggest regret in life was not telling the judges on Xfactor to f**k off,’ followed by a heart emoji.

They alleged: ‘Every contestant on the Xfactor was a slave to the show and got paid Zero while they made millions!

‘The fact that every contestant has to act like their judge mentors them! When in reality all they care about is their pay check!’

Jedward went on to claim they were seeking ‘justice’ for One Direction and Little Mix who both found fame on The X Factor.

Little Mix originally made up of Jade Thirlwall, Perrie Edwards, Jesy Nelson and Leigh-Anne Pinnock – were formed on the show in 2011. In December, Jesy left the band as it had ‘taken a toll on her mental health’.

One Direction – made up of Niall Horan, Harry Styles, Liam Payne, Zayn Malik,  and Louis Tomlinson were formed in 2010. The band has been on a hiatus since 2016 as they all launch solo careers.

Jedward claimed: ‘There’s a reason Syco is called Psycho! 1D and Little Mix are legally f***ed in contracts and can never speak out so we are!’

There’s nothing MODEST about their previous management dictating their every move from Relationships to how they live their own lives! Justice for 1D & Little Mix.’

Jedward went on to allege that they have One Direction’s contract, they continued: ‘We have 1D’s contract which was sent to use by mistake cuz we had the same label! Same management! Same security and accountants!