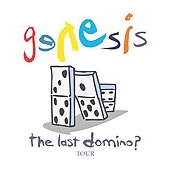 The Last Domino? Tour is an upcoming concert tour by English rock band Genesis, staged following the announcement of their reunion after a 14-year hiatus. It will feature the core trio of keyboardist Tony Banks, drummer/singer Phil Collins, and bassist/guitarist Mike Rutherford, the most successful and longest-lasting line-up in the band’s history, with Daryl Stuermer on guitars and bass, and Collins’ son Nic on drums.

The tour will comprise 33 shows across the United Kingdom, Ireland, the United States, and Canada between 15 September and 15 December 2021, marking the first Genesis performances since the trio reunited for the Turn It On Again Tour in 2007. It has been rescheduled twice due to the ongoing COVID-19 pandemic.