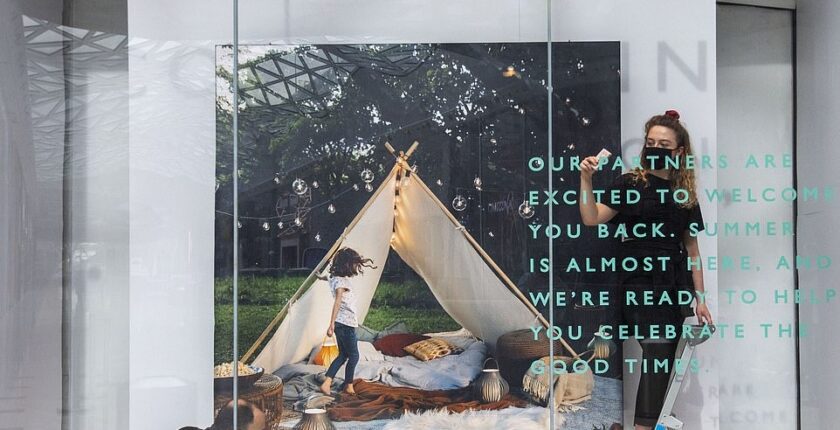 High Street gears up for big April 12 reopening: How John Lewis will let customers into fitting rooms for first time in 12 months, Primark is extending hours to 10pm while IKEA will run staggered entry system

Retailers from John Lewis to Poundland and Primark to Ikea today confirmed reopening plans for next Monday as shoppers look forward to a return to in-store browsing at non-essential stores after more than three months.

John Lewis outlined its plans for April 12 for its remaining 32 shops in England, which include customers finally being allowed to have their children’s feet measured for shoes and the reopening of technology support desks.

Fitting rooms will be reopen for the first time in a year, ‘customer service hosts’ will manage numbers of people entering and a returns process will involve new drop boxes and the quarantining of returned stock for 48 hours.

Ikea, which will also be reopening stores across England and Wales from next Monday, said safety measures will include a staggered entry system to enable social distancing, hand sanitiser facilities and more frequent cleaning.

Primark will be offering extended opening hours to as late as 10pm across stores with the aim of reducing queues, while Poundland is reopening more ‘hibernating’ shops and plans to open more new stores in the next six months.

Meanwhile new data from retail experts Springboard released today found that footfall across UK retail destinations was up 8.5 per cent over the period of March 28 to April 3 compared to the week before.

High streets and retail parks saw footfall increase by 9 per cent and 9.7 per cent respectively, while in Central London and other large cities footfall was three times as great as it had been over Easter last year. It comes as:

It follows a torrid year for the retail industry which has seen almost 190,000 jobs lost since shops were first forced to shut their doors a year including major collapses by Debenhams and the Arcadia Group.

John Lewis has now announced its stores in England will reopen next Monday, before its Glasgow store opens on April 26 and its Edinburgh site on May 14. TOP STORIESSHOWBIZSPORT

Next day click and collect services will resume in John Lewis shops, in addition to pick-up locations in Waitrose, Co-op and Booths, taking the total number of collect locations to more than 900.

John Lewis has said it will be employing these methods to help customers shop safely from next Monday:

We’re looking forward to reuniting customers with the joy of physical shopping, along with the excitement of our stores, whilst also introducing our customers to stylish new products at prices they won’t expect.

‘We’re also excited to be opening up much-needed services and helping customers choose those items that are harder to buy online – from the perfect mattress, to road testing the right pram or finding the right pair of jeans.

‘We want to make sure the shopping experience is as fun and inspiring as it’s ever been, while also ensuring that our customers and partners feel safe.’

The partnership, which also owns Waitrose supermarkets, has been forced to take desperate action to cut costs as shoppers move online and lockdowns led it to post a mammoth £517million loss – the first in its 157-year history.

On March 24, John Lewis told staff that four major department stores in Aberdeen, Peterborough, Sheffield and York will close, as well as four ‘At Home’ stores in Ashford, Basingstoke, Chester and Tunbridge Wells.

Meanwhile Primark said it is planning to offer extended opening hours across almost every store in England and Wales to help reduce queues, spread demand and give customers more time to shop safely.

For the first week initially, stores will open for two extra hours per day on average, typically an hour earlier and later, with times varying by store.